Why does my Council Tax keep going up?

Residents across the Horsham District are currently receiving their council tax bills for 2021/22 and understandably asking "why does my council tax keep going up when services keep being cut?"

So wrote Erasmus, the Renaissance scholar after whom the EU’s student exchange scheme is named. Those who know about education were adamant of the need for the UK’s youth still to be able to take part in the scheme after Brexit. The Liberal Democrats supported this in Parliament, but the Tories voted the amendment down. However, on the 16th January 2020, everyone was reassured because during prime minister’s questions, Mr Johnson said: “There is no threat to the Erasmus scheme. We will continue to participate. UK students will continue to be able to enjoy the benefits of exchanges with our European friends and partners, just as they will continue to be able to come to this country.” When criticised for not allowing the amendment, Mr Johnson said the MP was “talking through the back of his neck”. The Universities Minister later claimed the amendment was “game-playing by opposition parties”.

Anyone who’s tried to use Horsham’s Hop Oast Recycling Site lately will know it’s been in complete chaos. Restricted opening hours have caused hour-long queues extending all the way up to the A24 roundabout. They frequently block the entrance to the Park & Ride.

Thanks to county councillor Kirsty Lord (Lib Dem Hassocks and Burgess Hill South) action is at last being taken. Conservative-led County Hall has accepted her suggestion to switch to summer timetables immediately, instead of waiting till 1st April.

The recycling service is struggling because of repeated attempts by the Conservatives to cut availability. They’re now experimenting with a new booking system at five sites in West Sussex, including Horsham. Residents will be required to book a slot in advance and only one visit per week will be allowed.

The reality is, recycling centres are an essential service. The more they try to cut, the more it costs us to deal with fly-tipping.

As Councillors, we have been somewhat restricted about what we can say as pre-determination rules apply to planning matters. However, we have been listening to and reading all the comments which have been sent to us and we acknowledge the huge anger that exists about these proposals.

On 26th January, the Prime Minister told the nation that the Covid-19 death rate had reached 100,000. The loss of over 100,000 people to the virus was indeed a dark day for our country.

This is a mile-stone that no-one ever wanted to see, and the pain behind the statistic is immeasurable.

Should the May elections be postponed?

The Government insists the elections should go ahead, but it is Local Government that runs elections. Many senior council staff across the country are concerned about the feasibility and safety of holding the elections.

Many are reporting difficulties in hiring venues large enough to conduct vote-counting safely, in recruiting staff to run polling stations in time to train them, and staff to conduct the count itself.

Statement on the proposed closure of Broadbridge Heath Running Track

Following our election in May 2019, one of our first public visits as councillors was to visit the track to speak with coaches and users. On a warm early summer evening it was clear to us how much this public facility means to people and how widely used it is in the community. Matt himself had visited the track many times before our election as a spectator at Broadbridge Heath Football Club (prior to their move) and as an assistant referee at a cup final hosted at this venue. 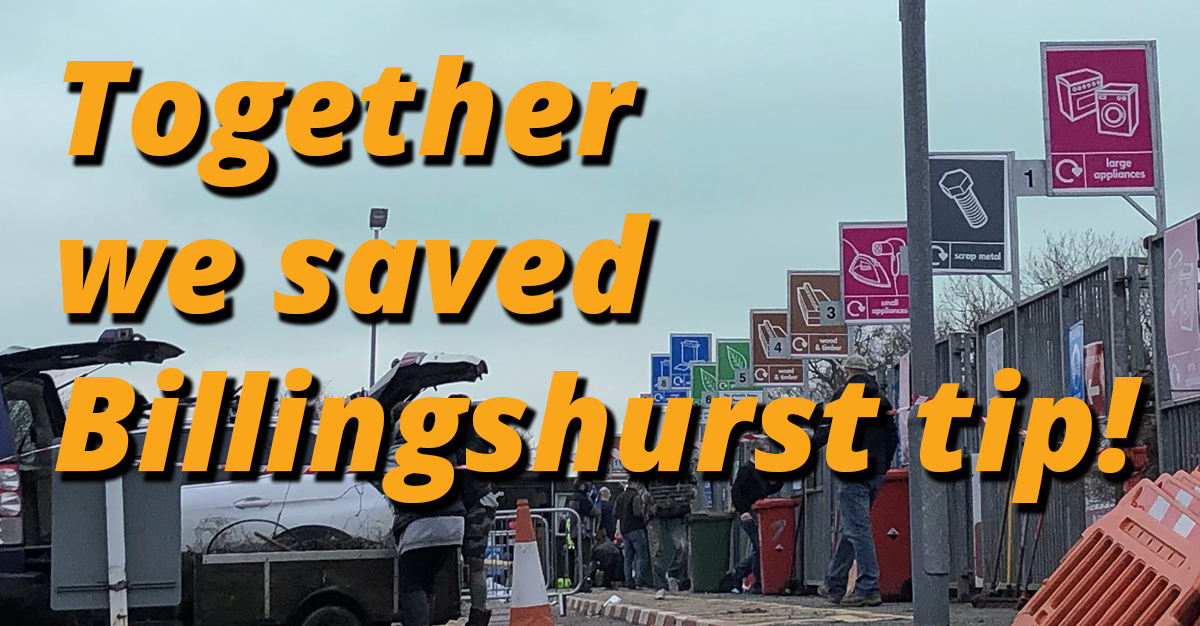 More than 3,000 people signed a petition to save the Billingshurst Household Waste and Recycling Centre – and it worked! West Sussex Tories have now backed off from their threat to close two of the County’s Recycling Centres. A huge ‘Thank you’ to everyone who helped.

Maintain Nursery Funding for Those Staying Safe at Home

Do you have children at nursery school?  The week starting 18 January is when your nursery’s funding for the whole year is decided on. But instead of basing this on how many children are registered, as you would expect, the Government plans to see how many children actually turn up.